You are here: Home / Uncategorized / Dr. Javid Featured In The Carmel Pine Cone!

Dr. Roya Javid is featured in this week’s edition of The Carmel Pine Cone. Click here for the entire article by Dennis Taylor or read it below. Enjoy! 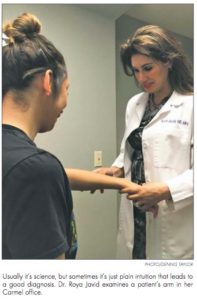 DR. ROYA Javid breaks into a broad smile when she shares the nickname her husband playfully hung on her a long time ago, stolen from an episode of “Seinfeld.” “He calls me, ‘the pimple-popper MD,’” said Javid, a dermatologist married to a man who knows better. Her husband is Dr. Richard Rupp, a Salinas-based radiologist.

Over the past year, usually while performing other routine procedures, Javid has discovered skin cancer on dozens of patients, including several cases of melanoma. One had a dark spot on the bottom of his foot, something she only noticed because he wore flip-flops to her office that day. She found a lesion on the skin of another man who had merely stopped by to get a prescription updated. Yet another patient, brand new to her office, showed up with discol- oration on his scalp that another dermatologist had routinely dismissed during annual exams. All were melanoma.

“I follow criteria, of course, to determine whether I should biopsy something, but sometimes it comes down to experience and instinct,” she said. “And maybe there’s angel on my shoulder telling me, ‘You need to biopsy this.’”

Since opening her practice in 2011 on Carmel Rancho Lane, Javid has built an impressive database of nearly 5,000 patients, almost entirely through word-of-mouth referrals. “I’m hoping that’s an indicator that people understand that I care about my patients and take each one of them seriously,” she said. “I started this practice from scratch, with zero patients. Nobody knew me. None of the local doctors knew me. I just literally hung a shingle, the way doctors used to do it in the 1950s, even though a whole bunch of people told me it just couldn’t be done that way anymore.”

She treats everything from athlete’s foot to malignancies, performing every procedure herself, and also specializes in many of the newest techniques. Those include Kybella (fat that causes a double chin is melted, rather than removed surgically) and Ultherapy (a nonsurgical method of lifting, tightening and toning skin, using ultrasound to stimulate the body’s own collagen). Her latest purchase, a state-of-the-art laser, has enabled her to implement 10 brand-new therapies over the past several months, she said.

“She wanted to become a physician from the time she was 5 years old,” said her father, Ahmad Javid, who earned a Ph.D. in engineering from UC Berkeley after emigrating from Iran, with borrowed money in his pocket, alongside his wife, Safoora, a school teacher. “To be honest, I was against it, and so was my wife. We thought it would be easier for a young lady to go into science and get a Ph.D., rather than become a medical doctor. But she was very determined.”

Javid and her sister, Eela, were born in San Jose, where they also attended school. Roya not only got straight A’s, but she completed most of her first-quarter studies at UC Berkeley while still in high school. “The carrot my parents dangled was that they’d buy me a car if I graduated with straight A’s,” she remembered with a laugh. “I worked hard and did it, and they bought me a used Toyota Celica. But my little sister, Eela, didn’t get straight A’s and they bought her a brand-new Jeep. Go figure, huh?”

After graduating with honors from Berkeley, Javid earned a Master of Health Science degree from Johns Hopkins University School of Hygiene and Public Health in Baltimore, then got her medical doctorate from George Washington University in Washington, D.C. She followed that with an internal medicine internship at the Washington Hospital Center, and completed her residency at the Advanced Dermatology Institute in San Diego. As a student, Javid explored multiple different types of medicine, but gravitated toward dermatology because it was the right mix of medicine and art, and because it enabled her to practice short, very focused methods of surgery.

One of her specialties, Javid says, is Mohs surgery (created by Dr. Frederick Mohs), a skin-cancer procedure that spares the skin while more effectively removing malignancies. “Dermatology is fascinating to me because the skin shows what’s going on inside the body. It manifests the disease process,” she said. “You have to understand the internal body, and anatomy and physiology, and also how it can manifest into a skin condition.”

With her husband – who’s a Pittsburgh, Pa., native and former U.S. Navy officer – she lived and worked in Pittsburgh, Wheeling, W.Va., and Japan (where Roya taught English to Japanese students) before returning to California in 2010, and settling in Quail Meadows.

“My husband and I have talked about it, and neither of us is sure we’d encourage our two boys (Alexander, 13, and Nicholas, 10) to become doctors,” she said. “Medicine is a long haul that really begins in high school. If you don’t get fantastic grades in high school, you won’t get into a great col- lege. If you don’t come from a great college, you can’t jump into a great medical school. And if you don’t do well in med school, you won’t get into an internship and residency. When I add it all up, I’ve been in school for almost 30 years.”
In fact, the homework never stops coming. Physicians need to keep abreast of the latest breakthroughs in medicine throughout their careers.

“I have patients come through my office every day with articles they found in magazines or newspapers, or some- thing they heard from a friend, about a new procedure, or a new medicine,” she said. “So I read. I study. I go to conferences. Staying educated is a daily process. It’s always challenging, but it’s extremely rewarding to be able to implement the latest technologies to help my patients.” 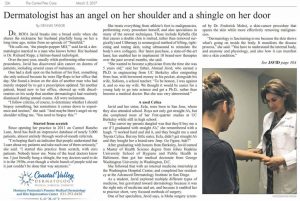 Schedule an appointment with Dr. Javid